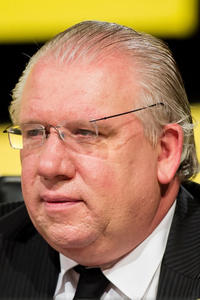 Other information:
Bernd Geske is married and has one son. He is the shareholder of May Holding GmbH & Co. KG, Erftstadt (near Cologne), a family-held company specialising in foodstuffs and semi-luxury goods.
Bernd Geske studied political science in Bonn from 1987 to 1988. In 1990, he completed his studies as a marketing communications specialist at the Westdeutsche Akademie für Kommunikation in Cologne. From 1989 to 1991 he completed a marketing apprenticeship with the Masthoff marketing agency in Düsseldorf.
Bernd Geske then worked as a marketing manager at BBDO Group Germany GmbH, Düsseldorf, from 1991 to 1993. As a member of the sports media planning team he managed clients such as Jacobs Suchard, Binding Brauerei, Pepsi und Wrigley's.
In 1993, Bernd Geske went into business for himself, founding glc – Agentur für Media- und Sportmarketing (now Bernd Geske Lean Communication) in Meerbusch near Düsseldorf. While his initial clients included certain sports enthusiasts that he carried over from his previous agency, he primarily worked for companies such as felix knusperfrisch and Teekanne. He also worked as a partner with the second and first Bundesliga club Fortuna Düsseldorf. Beginning in 1996 he then steered his company towards the stock exchange management business.
Since 2012, Bernd Geske has also belonged to the circle of friends of the Council of Elders of Ballspielverein Borussia 09 e.V. Dortmund.