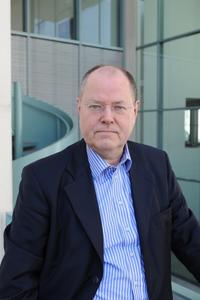 Member of the Supervisory Board of Borussia Dortmund GmbH & Co. KGaA since 30 November 2010

Other information:
Peer Steinbrück is a married father of three.
After completing his Abitur matriculation examination in 1968 and serving two years in the German Bundeswehr, he studied economics and social sciences at the University of Kiel. He graduated in 1974 with the degree of Diplom-Volkswirt.
Peer Steinbrück joined the German Social Democratic Party (SPD) in 1969 and the IG Bergbau, Chemie, Energie trade union in 1995.
In 1974 and from 1976 to 1986 he held various roles at federal and state ministries, the Federal Chancellery in Bonn, the Permanent Representation of the Federal Republic of Germany in East Berlin and in the SPD parliamentary group in the Bundestag.
From 1986 to 1990 he served as the chief of staff for Johannes Rau, the Premier of North Rhine-Westphalia.
He then worked for six years in the state government of Schleswig-Holstein, first as State Secretary in various ministries (1990 to 1993) and then as the Minister for Economic Affairs, Technology and Transport (1993 to 1998).
Peer Steinbrück then returned to North Rhine-Westphalia, where he served in the state government as a member of the Landtag and as Minister for Economic Affairs and the Middle Class, Technology and Transport (1998 to 2000), Finance Minister (2000 to 2003) and as Premier (2002 to 2005).
He was the German Finance Minister and Vice Chairman of the SPD from 2005 to 2009.
He was a member of the German Bundestag from 2009 to 2016. He ran as the SPD's nominee for chancellor in the 2013 elections. In 2014, he became Chairman of the German-US Parliamentary Friendship Group in the German Bundestag.
In 2010, Peer Steinbrück began a five-year term of office as a member of the Supervisory Board of Thyssen Krupp AG.
He is the author of non-fiction books and is active in various (cultural) clubs, associations and foundations.