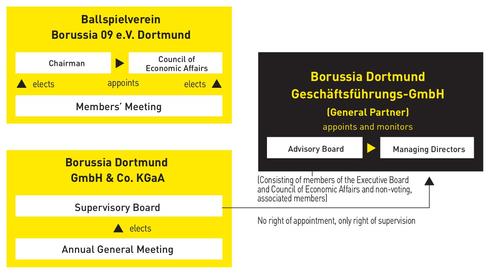 The rights and duties of the supervisory board of Borussia Dortmund GmbH & Co. KGaA elected by the annual general meeting are limited. In particular, it does not have HR responsibility, i.e. the responsibility for appointing and dismissing managing directors at Borussia Dortmund Geschäftsführungs-GmbH and regulating their contractual provisions. The Supervisory Board is not entitled, either, to adopt Rules of Procedure or a catalogue of transactions requiring agreement for the General Partner. Rather, the committees at Borussia Dortmund Geschäftsführungs-GmbH are responsible for such rights and duties, namely the subcommittee there and the Executive Committee that it in turn forms.